A Woman of Genius...

...does not exist, if she does, she must be a man' 19th century art critic

Though women have a long history as artists, their contributions to the arts were shaped by the society and culture of their time. In addition, their reputations as artists were subject to the caprices of later interpretations of art history.

The Women of Genius series’ of drawings focus on self-portraits by female artists: women looking at themselves and depicting themselves as they choose.

This exhibition was a collaboration between the artist and Maidstone Museum. It set out to explore a new facet of the museum collection, as well as highlight the historical achievements of women in the arts by showing rarely seen artworks that have been hidden away in museum storehouses alongside work about women artists by Cooke. She also made a further series of works for this exhibition in response to the craft objects from the museum collection made by women.

This became an online exhibition at GalleryEll, which you can see in full below 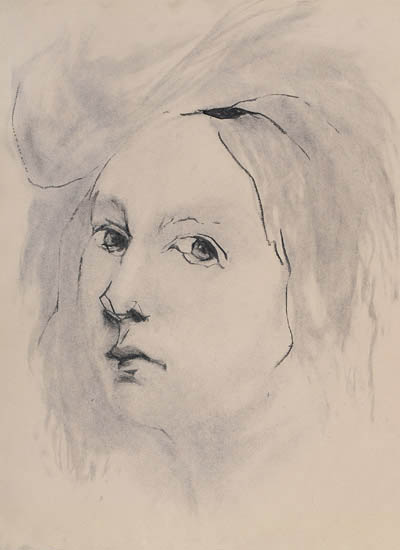 For most women wanting a professional career in art, access to training and materials was one of the main obstacles. For this reason, many early female artists were the sisters, wives or daughters of artists, giving them precious access to these resources. However, it then becomes difficult to distinguish between works of individual family members and identify those made by the women. One of the reasons that there are so few works positively attributed to Marietta Robusti is that her work was subsumed into that produced by the studio of her more famous father, Tintoretto.

Women of the time were not expected to have professional careers, so many were forced to give up their practice upon marriage. Anna Dorothea Therbusch only resumed painting after the death of her husband. Those who managed to overcome this often had husbands who were supportive and ran the family home, but family and domestic scenes often still featured strongly as subject matter.

“Male genius has nothing to fear from female taste. Let men conceive the monumental sculpture and the most elevated forms of painting [and] great art. Let women occupy themselves with those types of art which they have always preferred such as pastels, portraits, miniatures…or the painting of flowers” Legrange, 1860

There was a prevailing attitude up until the 20th century that women did not have the strength, or the ‘spark of genius’ to be great artists and that there was something essentially feminine about the work of women. Stereotypes and boundaries were set for women artists, either through media and subject matter or though access to instruction. Even when women transcended these boundaries, the art establishment sought to find ways to reduce the works to something separate from the male art sphere. Works by some of the artists here were bought by museums and collectors as that of their more famous male contemporaries. When the mistakes came to light in the 1950s and 60s, the works were reappraised as clearly displaying the “weakness of the feminine hand.”

Restrictions in travelling and working outside of the home in professional studios meant that women often specialised in portraiture and flower painting which could be done in the family home. Others specialised in media such as watercolour and pastels. These were more accessible and required less rigorous training than oils, but were seen as lesser pursuits by the art establishment of the time.

In addition, until the late 19th century it was thought inappropriate for women to view nude male life models. This restricted women’s ability to gain the most lucrative commissions of oil paintings and sculptures of historical subjects, which tended to feature the male figure. Lavinia Fontana was the first artist to challenge this, though critics noted that her works “…do not have the excellence and valour found in such things by great men, because they are after all by a woman who has left all that is suited to her hands and fingers”

Before the 1500s, crafts such as tapestry and embroidery were carried out in similar studio arrangements as those for painting and sculpture, with collective effort used to produce works of art. The Italian Renaissance promoted the idea that painting or sculpture was the work of a solo genius, rather than an artisan product, so over time, craft skills were demoted. Eventually, these crafts became associated with female production and denigrated as mere mechanical work, requiring diligence and patience but not the ‘spark of genius’ required for great art.
It was thought appropriate for daughters of the middle and upper classes to learn these skills to make them ‘accomplished’ ladies, so handcrafts such as paper-cutting, needlework and pin-prick pictures were practiced as amateur pursuits, alongside singing and music. The Maidstone Museum collection has many examples of these works, some of which are displayed here.
There were some women who elevated these various crafts to new heights, making an art out of them – perhaps even putting the spark of genius into them. These have been depicted here in a series of portraits using a technique of pricking holes in paper, a brief enthusiasm for which existed in the late 1700s.

Women’s artworks and reputations as artists have often not survived intact. Sometimes the provenance has been forgotten; sometimes the works have been attributed to male contemporaries, or become lost in family-run studios.
Due to the relatively low monetary value placed on women’s work, there is little financial incentive to conserve, restore or track down their paintings, especially if a piece has been passed off as that of a higher earning artist. For some, only a self-portrait survives in an archive with not even a name attached.

Piecing together the past can be a difficult task when often, so little biographical information is available. For example, the artist Jane Day was clearly an accomplished portraitist who won commissions of Maidstone dignitaries, yet we know very little else about her.

Many women who were very successful in their lifetimes became invisible for the majority of 20th century art history. This leads to the question of what will survive from our era. In a hundred years’ time, which names from our time will have been written about in the history books, who will be fetching higher prices at auction and who will have their work in prestigious collections?